Meetings vs. others types of gatherings

@CCGPierre spotted me drawing this during the final session and Christoph asked me to post it to the forum. I was thinking about the definition of a meeting, and that we’d shortchanged the importance of a single focus of attention, which usually means one person speaking at a time. The leaves me with three distinguishing characteristics: co-presence, an organizational context (people speak as occupants of roles in pursuit of some organizational objective), and the single focus of attention (adherence to the one-speaker rule). Those are in black, and different sorts of gatherings with different combinations of those characteristics are in red. 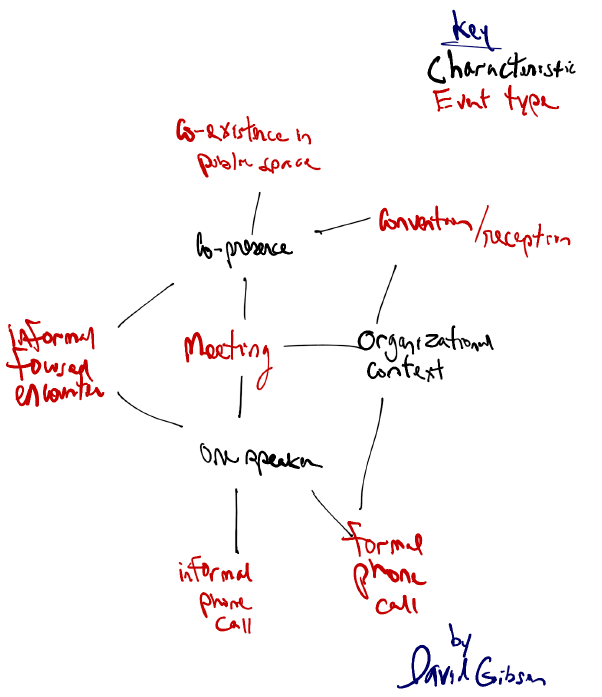 An overarching theory of meetings?

Luhmann, and at times I’ve found inspiration there: there are events, and connections between events (which constitutes structure), and interaction systems that connect psychic systems (minds) that only partly understand one another.

That reminds me that I also used Luhmann in my doctoral thesis (pp. 85-87) to try and grasp what is unique about meeting arenas in comparison to other social forms/ concepts. I say “meeting arenas” to distinguish the meeting as a structure or setting from the meeting as an activity. (I have developed this idea in my Organizing Spaces article: doi: 10.1177/0170840613479232.) So here is how I made sense of things back then (2010):

In order to understand the role of permanency, I distinguish two dimensions comprised in Neidhardt’s notion of ‘permanency’: permanency of membership and permanency of identity. Groups and organizations subsists latently even when their members are temporarily dispersed because their membership status as well as a sense of shared identity remain.

The interesting point is that also meeting arenas continue to exist latently as a more or less institutionalized meeting place, but this permanency is not due to permanency in membership (because it has no membership) but only to the permanency of the arena’s identity which is known in a wider collectivity of participants as well as non-participants. This identity may be closely connected to a physical place and a set of written rules, but it can also exist virtually and informally. The repetition of similar meetings for a certain purpose creates a tradition that establishes the arena’s identity. In that sense, a meeting arena is organized, but not necessarily part of an organization.

Thanks for this @dgibson1, I just wanted to note that, in social presence theory, a psychological feeling of co-presence is not limited to face-to-face settings, but would also be related to for instance phone calls.

in social presence theory, a psychological feeling of co-presence is not limited to face-to-face settings, but would also be related to for instance phone calls.

I should have said “physical co-presence.” I think most participants wanted that as a defining characteristic of a meeting. Yet much of what is accomplished in a meeting, and through talk about meetings before and after they occur, could also be accomplished if everyone called or Skyped in. See here:

An overarching theory of meetings? Symposium

I was thinking on this one, and on the question of Why Meet? recently, and it occurred to me that what we have heard thrown around as a joke may be the most important unifying definition we have for meetings. Specifically, when you ask a practitioner what a meeting is, they’ll say “Whatever my client says it is.” I swear I heard someone say the same thing about their research - when looking at meetings, they look at whatever their subjects happen to call meetings. This makes the defining characteristic of a meeting this: it is declared as such. Which raises all kinds of cool questions! Wh…