One possibility: meetings are useful because of the phenomenon of “unforeseen relevance,” when what I say to a subordinate is in some way relevant to someone else thought I didn’t anticipate it and thus wouldn’t have brought it to their attention if all communication was dyadic.

meetings are useful because of the phenomenon of “unforeseen relevance,”

I like the way you often manage to put succinct labels on complex phenomena! Fascinating analytic thinking!

@hsjsls’s answer (or one of her answers) to the question seems clear to me: meetings allow participants to do all kinds of things (that may not be able to do otherwise) while officially attending common business. I quote from her book (p. 42, my emphasis):

March and Olsen (1976) … suggest that a choice process provides an occasion for a number of things, including fulfilling role expectations, defining virtue and truth, interpreting what is happening, challenging or reaffirming friendships, power, and status, socialization of members, and having a good time (pp. 11-12). However, in my view, it is the nature of the meeting form, and not the choice, that provides the best structure for this mix. Meetings are able to do this because they are a context where one thing can always be talked about in terms of something else.

That’s why Schwartzman’s definition (p. 61, my emphasis) famously includes “a purpose ostensibly related to the functioning of an organization or group”.

One of these “unofficial” things that people do in meetings is negotiate their relative status.The excerpt below illustrates this well (taken from the same book, pages 70-71: 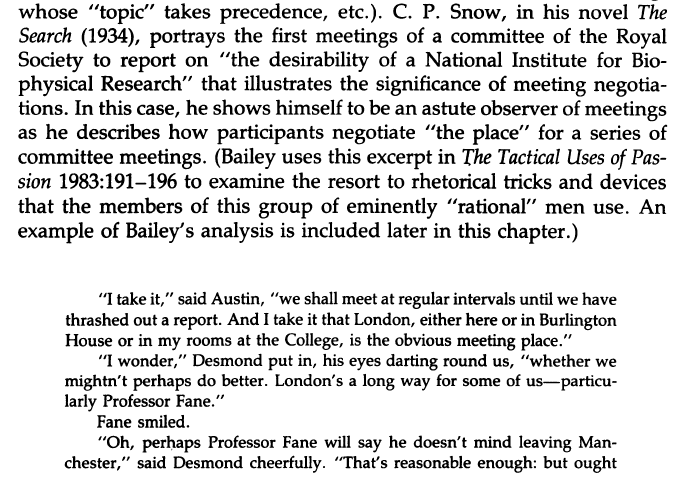 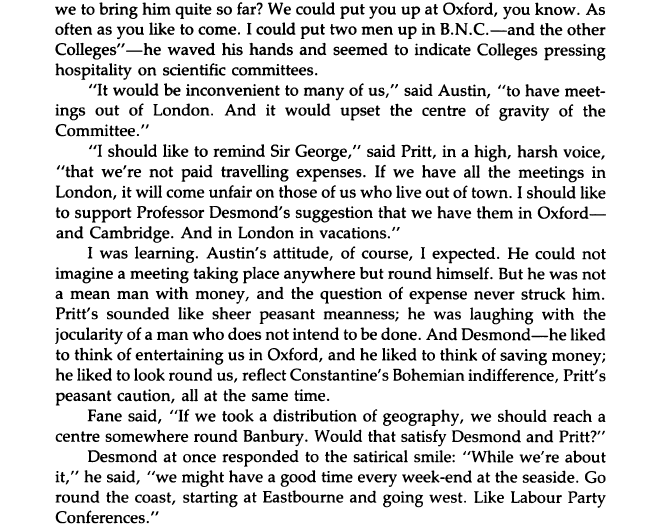 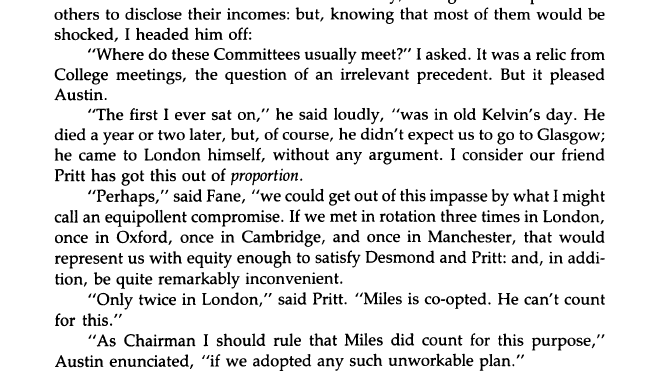 We have a layman’s/business answer to this one, as it’s a question that gets asked in practice. Usually in the context of “Meetings suck, let’s just cancel them all and use chat instead!”

David - the follow-up post in that series about basic meeting structure show’s Sam Kaner’s Diamant of participatory decision making, which is also something we talked about.

Why meet? Understanding the Function of Meetings in the Collaborative Workplace

Meetings: what are they good for? We share our mental model for understanding what meetings do and how to use them to keep collaborative teams working well.

There’s a lot to like in that blog! Two key ideas: meetings create a shared perspective, and they provide a way of realigning people when their (extrapolating a little) motives, understandings, and work paces start to diverge. In terms of shared perspective, I wonder what the mechanisms are for that. Someone speaks, and everyone hears what they say. Someone responds, and in responding tests out their understanding of the emerging perspective, and disagreement might be revealed that would otherwise have gone unnoticed.

Then I wonder when this process goes awry for I sense behind Elise’s post a when-all-goes-well caveat. I’ve been in meetings when no one talks but the chair and sometimes I think it’s because the less we’re told, and heard to be told, the easier it is for us to later say that we misunderstood what was required of us.

- because that function absolutely breaks down if it isn’t minded. The rest of the series addresses how to approach meetings so they can achieve this function. I wrote this series for our clients who are trying to improve meetings, but have no training or background. It’s my pitch at the “what would we put in a meetings 101 curriculum”. Just one article to go and it’s done.

I have a theory about what makes a meeting a “meeting” after the symposium, and your chair example fits it perfectly. Short version: meetings are defined by intention. Someone must declare the meeting, it is for a set time and place, and it creates obligation upon others. This is why the primary shared function of meetings worldwide is as an excuse to get off the phone with our mothers. “Sorry, mom! I have to run to a meeting!” This also underlies why people HAVE to say they hate meetings, even though we know they really don’t. If they liked meetings, how could they use them as an excuse?

The intention makes the meeting, and imposes an obligation. We may resist the obligation, which can undermine the meeting. Still working on getting this idea into focus…

I love the concept of “unforeseen relevance”. It feels like a more functional version of serendipity - one that does not require an abandonment of structure or a mystical reliance on fate to be a natural outcome of meeting.

I think that’s pretty wonderful: a meeting carriers its own moral imperative, to attend, one that is recognized by others – “sorry, mom, this is the only time everyone can meet.” Even if it’s just a meeting with one other person, it’s something you’ve committed to and pulling out would mean inconveniencing the other person. “Sorry, mom, if it were up to me I’d skip the meeting but it would be a hassle for my colleague and you always taught me to respect others!”

Unfortunately not everyone experiences that moral obligation. Our chair recently announced a new quorum rule and in the very next meeting found that we lacked sufficient attendance to make any important decisions.

I think it’s because the less we’re told, and heard to be told, the easier it is for us to later say that we misunderstood what was required of us.

Like you can deny that you’ve seen an email as long as you haven’t replied to it.

“I was there, but unfortunately I was asleep.”

That’s interesting - I actually hadn’t thought of it as morally obligating as way to get people to attend. Rather, I was thinking of it as a way to legitimize getting out of other obligations.

So, instead of saying “no, I don’t want to go to lunch with you.” or “We need to stop talking now because I have other things I need to do”, you can always say “Sorry, have to run. I have a meeting starting in 10 minutes.” It’s one of the only completely acceptable, morally understood excuses I know, which makes it incredibly powerful. If you have a meeting, you can get out of anything, including other meetings. But - if we as a culture acknowledged that we enjoy meetings sometimes - that excuse would lose it’s power. It’s only ok to ditch someone if:

Both perspectives apply, though! I can see how the obligation idea then “guilts” us into attending some meetings we otherwise wouldn’t - but as your example points out, I think that force is weaker.
If this works like I think it does, it means our efforts to make meetings cool and interesting will never work, because doing so would undermine the power of the 3rd rule up there. No way are people going to give up such a useful excuse.

Ha ving used the meeting as an excuse to get out of some other entanglement you’d better attend!

An overarching theory of meetings?