What elements of a definition of a meeting do we agree on?

Here are the results from the quick survey about which elements meeting researchers and practitioners consider important or not important as part of a definition of a meeting. I distinguished 2 types of elements: genus and specifics:

Which of these elements should be part of a generic definition of the meeting?

As you know, the classical format of a defintion is that of Genus proximum and differentia specifica, i.e. you give a broader family of objects to which the definiendum belongs and then give the specifics that distinguish it from other family members.

So here are the preferences regarding the genus elements (note that this is based on the preferences of only 17 people, 10 of which identified as academics, 4 as practitioners and 3 as both):

So among these people the strongest agreement is about that meetings are gatherings, communicative events, but not genres. 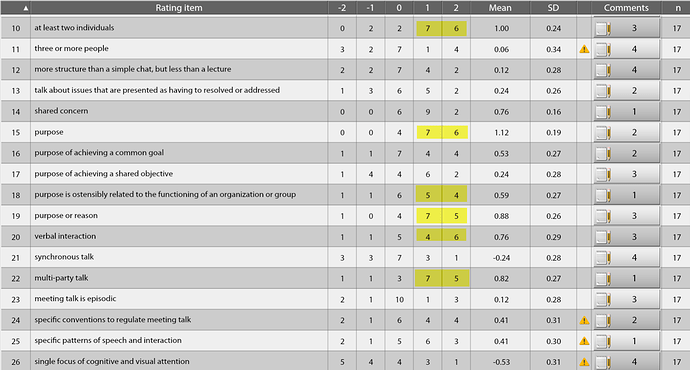 I think the overall picture is that many of the elements are controversial but there is some agreement on these elements:

To better understand these choices, we need to also look at the comments that people left when filling in the survey, but I currently don’t have time to do this. It will also be interesting to see how the picture changes when distinguishing between academics and practitioners, but I will also have to postpone that for the moment.

This resulting list of defining characteristics makes sense to me. Although I do believe there is some overlap in the concepts. A candidate definition for consideration:

A meeting is multi-party talk (two or more co-located, physically or virtually) people, who are interacting in perceived organizational roles, for a purpose related to the functioning of an organization.

I think that part is worth discussing further. Based on Simmel’s work on “the third”, I would argue that an encounter between two people is fundamentally different from one with three or more and should therefore not be lumped together with dyadic situations (see also Piet Strydom’s work on “triple contingency”).

I would agree…as a group scholar and theoretically…but practically
I have a lot of 2 person meetings.