The classic book in academia when it comes to new thinking about meetings is obviously @hsjsls’s 1989 book The Meeting:

But most books with a strong focus on meetings do not reveal this in their title. So the purpose of this topic is create a list of books which are essentially about meetings, even if they don’t state so explicitly. Just reply to add your reference (and feel free to mention even those that are more explicit about this.) Please give full references even if you provide a link.

So here is the full reference for the above:

Another classic is, of course, the late Deidre Boden’s The business of Talk: Organizations in Action in which she uses Conversation Analysis to show how organizations rely on talk in meetings to get things done.

In this book, the authors translate insight from both their own and others’ research into hands-on advice for global office communication. I really liked how some surprising angles (such as swearing or joking) are used as an introduction for important theoretical concepts (such as the active role of the communication partner and establishing common ground). Reading the book helps you to become more sensitive to the (cultural) background of the people that you communicate with and applying the recommendations results in more effective distributed meetings and email interactions.

Since no one else mentioned my book on this page I decided to do it myself: The title is Meetings, Manners and Civilization. The Development of Modern Meeting Behaviour.
I wrote the original version in Dutch in 1994; the English translation / elaboration was published in 1999.
The book is a inquiry into meeting networks and behavior in Western Europe and the USA since the Middle Ages until today. You find more information about the book here: 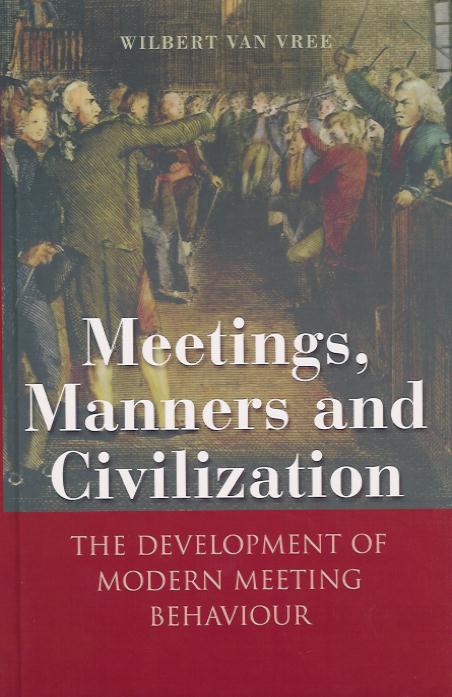 If you want to have a PDF-copy of my book which you can read on your PC or e-reader, just send me an email and I’ll mail it to you for free!! Mail to: wilbert@vergaderwijzer.nl

2 Likes
An overarching theory of meetings?
The power of meeting across political divides
Tensions in meetings
christoph (Christoph Haug) May 31, 2017, 10:34pm #6

Jürg Steiner (@jsteiner), Maria Clara Jaramillo, Rousiley C. M. Maia and Simona Mameli just published their book: Deliberation Across Deeply Divided Societies: Transformative Moments with Cambridge University Press.The central concept in this book is not meetings but deliberation (which, according to the authors, means that “all participants can freely express their views; that arguments are well justified, which can also be done with well-chosen personal stories or humor; that the meaning of the common good is debated; that arguments of others are respected; and that the force of the better argument prevails, although deliberation does not necessarily lead to consensus” (p. 2). But since these deliberations take place in meetings I think that this is also very much a book about meetings. And when it comes to “transformative moments”, that is surely something that can be experienced in all kinds of meetings, right? (I think @jennyhelin has also done some work in that direction?)

Dear all
our book about Deliberative Transformative Moments (DTM) in deeply divided societies is indeed about meetings. We brought together ex-guerrillas and ex-paramilitaries in Colombia, police officers and locals in favelas of Brazil, and Serbs and Bosnjaks in Srebrenica. The topic for discussion was to find ways for a better culture of peace. We analyzed the conditions under which a discussion was transformed from a low to a high level of deliberation and also the conditions under which the opposite happened. The moderators remained passive and let the discussions go wherever they went. The main result is that participants themselves were often able to bring back a discussion from a low to a high level of deliberation. In this way deliberative leaders emerged. There were, however, also deliberative spoilers who were often responsible that a discussion lost its deliberative momentum. With this research strategy we get at the dynamics of meetings.
Best wishes for the research of all of you
Jürg Steiner

Blob: “Cecilia E. Ford rejects popular notions of gender difference and even deficiency in women’s language use. She uses careful analysis of interaction to counter negative myths, focusing on women’s turns as exemplars of skills required by men and women alike to contribute to workplace meetings. Based on videotaped meetings in a variety of settings the author offers new insights into vocal and non-vocal practices for getting and using turns in these common workplace events. The book introduces conversation analytic methods and presents new findings on turn-taking, the use of questions to present challenges and open participation, and the interactional skills required to effectively raise issues that go counter to ideas of higher-ranking co-workers.
For anyone who wants to understand meeting interaction, Women Speaking Up offers a wealth of well-grounded new perspectives, while celebrating women’s demonstrated competence.”

Renita Thedvall and my edited book is titled: Meeting Ethnography: Meetings as key technologies of contemporary governance, development, and resistance. This project focuses on comparative inquiry into the role and nature of meetings in different places and types of projects.

Through July, this link should provide access to browse the whole book online. Check it out if interested! 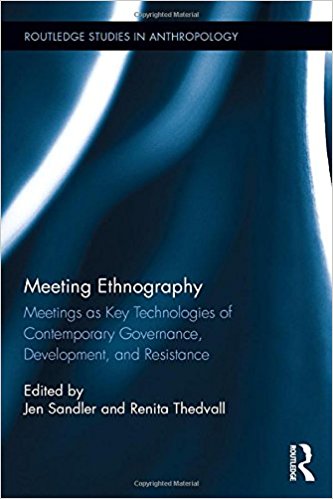 Do you want books from practice and popular business writing too? Or is this just about the academic literature?

Good point. I was thinking that too, when I saw your long list of meeting handbooks on Amazon the other day. Why don’t you start a new topic with meeting advice books and we keep this topic to descriptive books?

Nonprofit Organizations: Creating Membership through Communication published by Hampton press in 2009 is another book that is based exclusively on data generated from board meetings where I was a participant/observer. Drawing upon EC, EM and MCA, I take issue with previous research about organizations that does not focus on talk (similar to Boden and Schwartzman).

More information can be found on the publisher’s website here:
http://www.hamptonpress.com/Merchant2/merchant.mvc?Screen=PROD&Product_Code=1-57273-883-9

Talk at Work: interaction in institutional settings (1992) Drew & Heritage. Not so much about “meetings” but about how talk happens in all sorts of work settings, this is a classic in the field of interaction studies and conversation analysis but it might be of interest to some curious about other aspects of talk at work. Talk at Work: Interaction in Institutional Settings (Studies in Interactional Sociolinguistics 8) edited by Paul Drew and John Heritage. New York: Cambridge University Press, 1992. 580 pp.

This volume is edited by @f.cooren and includes a chapter by @karen.tracy:

Blob: "This work provides an exceptional case study, shedding light onto the functioning of an actual corporate board of directors. It presents analysis of a series of corporate management meetings shown in the 1974 documentary film, Corporation: After Mr. Sam. The film chronicles the discussion and communication processes as a company considers how to replace its president, and it serves as a unique opportunity for analysis of real-world organizational discourse.

With an impressive list of prominent contributors, Interacting and Organizing: Analyses of a Management Meeting employs the dual perspectives of organizational communication and language and social interaction (LSI) to examine the film. It is arranged around specific topics, analyzed separately by organizational communication and LSI scholars. Editor François Cooren provides an introduction for each topic, and a comparison and synthesis conclude each part. Readers will appreciate the information presented, as it is an arena typically off-limits to outside eyes. The transcript of the film is included as an appendix to the volume."

Part I: Leadership and Speakership: Which Voice Matters?
1. Leadership and Speakership: Which Voice Matters? (James R. Taylor and Daniel Robichaud)
2. Management as Metaconversation: The Search for Closure Enacting the Institutional Role of Chairperson in Upper Management Meetings: The Interactional Realization of Provisional Authority (Anita Pomerantz and Paul Denvir)
3. Liberating Leadership in Corporation: After Mr Sam: A Response (Gail T. Fairhurst)

Part II: Organizing and Emotional Display: Contradictions and Paradoxes
4. Feeling-Limned Talk: Conduct Ideals in the Steinberg Succession Meeting (Karen Tracy)
5. Contradictions in the Metatalk About Feelings in Corporation: After Mr. Sam (Linda L. Putnam)
6. The Persuasive Nature of Emotion and the Cultural Nature of Feelings in Organizations (Kristine L. Fitch and Megan Foley)

Part III: Strategies of Decision Making: Competencies and Coherences
7. “We Ought to Have … Gumption …”: A CRA Analysis of an Excerpt From the Videotape Corporation: After Mr. Sam (Robert D McPhee, Stven R. Corman, and Joel Iverson)
8. The Effect of Interactional Competence on Group Problem Solving (Robert E. Sanders)
9. Bringing the Outside in: A Contextual Analysis (Cynthia Stohl)

Part IV: Can We Study Interactions in Documentaries? Ways of Talking, Closure, and Data
10. Sam Steinberg’s Use of “Tell” in Corporation: After Mr. Sam (Gerry Philipsen and James Leighter)
11. On Talking to Not Make Decisions: A Critical Analysis of Organizational Talk
(Stanley Deetz, Rene Heath, and Jessica MacDondald)
12. Documentaries Are Not Data (D. Lawrence Wieder, Heidi Mau, and Cheryl Nicholas)
13. Closing Words (and Opening Discussions?): An Afterword on Corporation: After Mr. Sam (Cliff Oswick)

The title is Meetings, Manners and Civilization. The Development of Modern Meeting Behaviour.

@wilbert I am finally getting around to reading your book and am finding it delightful! I’m about halfway through. It’s very frustrating for my husband because he’s trying to read a new fantasy novel page-turner and I keep interrupting him to share some fun new tidbit from your book.
When I’m done, perhaps we can schedule a video interview? I’d love to share some of these stories with our community. I think the historical perspective is super useful, especially for our clients who struggle with parliamentary procedures.