Got a meeting? Take a walk

This idea makes me think: okay, works fine as long as we’re not more than two or maybe three people. But the technology guy in me thinks: the main problem is obviously acoustics; not everyone can hear everyone else while walking in a larger group. So shouldn’t it be easy to use some devices (like our phones with a headset) to create an audio link between all participants (basically like a conference call)? A kind of walking, talking conference call.

Well, actually, although using our phones for this would be convenient, but there’s a potential problem: since they are digital devices, the audio needs to be processed twice: from analogue sound waves to the famous “zeros and ones” on the sender’s phone and then back again to sound waves on the receiving phone. The signal processing causes a delay, also referred to as latency. The guys from CrowdMics told me that it took them about a year to make the processing effective enough to reduce the delay in their app far enough to make the audio-experience acceptable for the speaker (if the delay is to long, and the speakers voice is amplified over a Loudspeaker, the speaker hears him or herself). But so far it only works on iOS devices because Android is less optimized for audio processing (that was in early 2016 though, maybe it works now?).

Regardless: at our conference walk, we don’t have feedback through the loudspeaker like they have at conferences where CrowdMics are used. We have our headset in our ears, we you would only need to make sure that the speaker doesn’t hear his or her own audio and then, my hunch is, that a (very) few hundred milliseconds latency won’t matter (though it might if people can hear the speaker both on the phone and through the air.

The other challenge for the walking virtual meeting is to keep the communication local so that it works without an internet connection. I suppose the easiest would be to bring a portable computer that acts both as a wifi access point and a server for the mobile app. This could be done today, as the technology already exists for free. Take for instance a mumble server in combination with a mumble mobile app (Plumble for Android, Mumblefy for iOS).

To try this, you need of course a bunch of technophiles who are willing to try out these kinds of things. And you need a meeting agenda that can be handled while walking and where participants don’t need to take a lot of notes. I’m not sure what I will meet those conditions, but if you do, please share your experiences here.

I’d be very curious to hear how it worked, both technically and in terms of the meeting itself.

What about increasing creativity 60% through a normal walk and talk. Look at this interesting study from Stanford Give Your Ideas Some Legs- The Positive Effect of Walking on Creative Thinking.pdf (141.4 KB)

Yesterday, 8 of my colleagues and I had a walk’n’talk meeting to discuss a text that we had all read. It wasn’t a meeting in the sense of us planning some future action together, so we actually called it a walk’n’talk seminar.

Anyway, I was thrilled by how well it worked. We had set aside 45 minutes for this after lunch and indeed managed to be back at the office 50 minutes later. Not too bad.

But that’s not what I meant by “it worked”. What worked was the method that one of my colleagues had learned at a different workplace: we walk in pairs, pretty much like they do in day care walks: 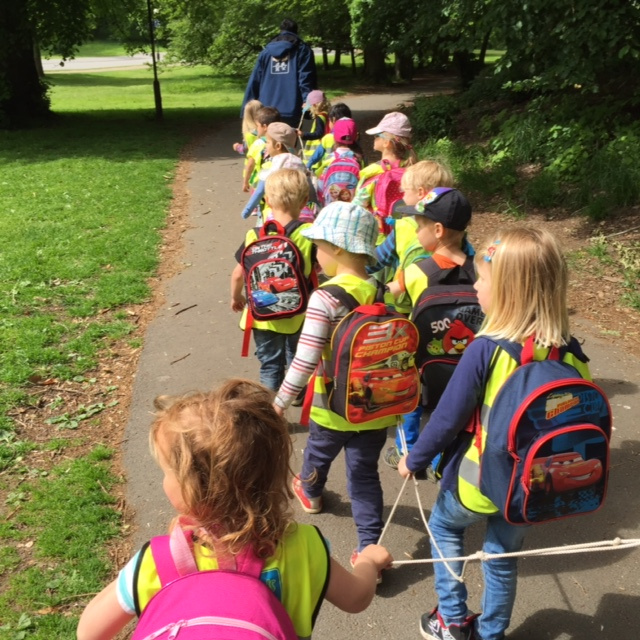 After 10 minutes, the person on the right would move one row to towards the front and continue the conversation with that person, and so on.

It’s difficult to say whether our thoughts where so much more ingenious or fluent than if we had met at a table, but here are some very simple observations:

Obviously, like any format, this format works in some situations and not in others. For example, I would not expect a collective conclusion or even decision from this, unless you spend some extra time in a circle to summarize and draw conclusions collectively. But I was positively surprised that we did actually generate two follow up actions: one participant volunteered to pick a text for us to discuss the next time and another will arrange an (ordinary) seminar to get feedback on a text that he is writing on a similar topic.

I think what happened with these two participants was that they had the opportunity to test certain ideas four times with different people within a very short time frame. In the first case, the “idea” was that the text we were discussing misses an important topic that another author has written about extensively. And in the second case, it was some idea from the article he was working on. Or, perhaps more generally, he realized that the people he was talking to would be the right people to get feedback from.

In any case, what I find interesting here is that this walk’n’talk format allows people to bounce the same idea or thought multiple times off different people without looking strange. In practice, the idea will probably not be exactly the same but be modified somehow after each conversation, but that only increases the value of this method.